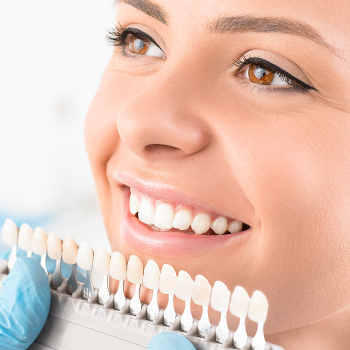 Q: What are some of the things that cause the teeth to lose their natural color?

There are two main things that cause the teeth to lose their natural color. One is that teeth naturally get darker with age. Another contributing factor is that just about anything that’ll stain your clothing will also stain your teeth. And if it is done long enough over a period of time, it actually infiltrates the enamel of the tooth and stains beneath the dentin.

A young tooth has a large canal and pulp chamber, and the tooth becomes more reflective. Anything that’s more reflective is going to seem brighter. So as the teeth age, the canal and the pulp chamber shrink and as they shrink it puts down reparative tooth structure and that reparative tooth structure then makes the tooth appear not to reflect light the same way. Not near like it did when someone was younger.

Q: To clarify. It’s not the surface of the teeth that gives the tooth its appearance, but something going on inside the actual tooth?

Q: What role does fluoride play in the discoloration of the teeth.

Fluoride is found in drinking water, but it should never go above one part per million.

Fluoride has a black color to it and gets deposited into the tooth. Especially when the tooth is putting down structure as it is forming in children under 8 years of age.

The advantage of having fluoride in the water is that it makes the tooth harder and less susceptible to decay. The disadvantages at high concentrations is that it discolors the teeth and it can actually make teeth turn black.

Q: So children over the age of eight and adults should get fluoride treatments?

People that are going to the dentist regularly to get fluoride treatments will have smoother surface teeth than people that don’t. If the tooth is smoother then it’s easier to clean and it’s easier to prevent tooth decay and gum disease.

Q: We were all taught to do the whole fluoride thing and many of us made the assumption that it’s in our water and that’s enough to do the job. But there’s actually treatments you’re saying you can go through at the dentist office that gives you a better outcome than simply relying on what’s in the tap water?

That’s correct, because it’s in higher concentration. There’s a varnish that we paint onto the teeth that’ll stay on for five to six hours. And microscopically, when you look at before and after, the tooth is much smoother after the varnish. Even when you take the varnish off the tooth it is still smoother than it was before the varnish was put on.

At the beginning of my career I always thought that fluoride was more for kids. But as people get older they’re eating more sweet things too, and they may not be brushing their teeth as well either. And some people have a higher propensity to tooth decay than others. I think all adults should have fluoride, honestly.

The way it was done when I was a kid was that you put these trays in your mouth like compression trays and they filled it up with fluoride and you had to hold it in your mouth for four minutes. And it only stayed on the teeth as long as the tray was in your mouth.

Now we can put this varnish on it which sticks to the tooth and stays on for up to six hours. So you’re getting the fluoride treatment for six hours as opposed to four minutes. It’s a much, much better way of doing it. And you can actually eat and drink or brush your teeth because it’s not going to come off. It comes off little by little.

Q: Is there anything else that can cause the teeth to stain?

Teeth can also stain as a result of taking the prescription tetracycline which is a broad spectrum antibiotic.

The problem is that tetracyclines is a chelating agent and bonds to the calcium when the tooth is depositing calcium into the teeth. If a child gets placed on tetracycline prior to the age of eight years old, they’ll end up with black striped teeth. Because of this we learned to only prescribe tetracycline to people over the age of eight.

Q: What are some of the differences between using a store bought product and a more professional solution like found in the dentist office?

After covering the gum tissue you take a light source and you aim it at the solution that’s on the tooth and it heats the tooth slightly to allow the pores of the tooth to open and the carbamide peroxide to get in.

After around three treatments, we give the patient a product that they use for a week at home that will continue to whiten the teeth.

Studies have shown that the longer and slower that you do a process, the longer it lasts. So for people that are getting married next week, they need the fast results. The chair side whitening is by far the quicker way of doing it. But it’s also a way that if you don’t follow it up with a lower concentration for a longer period of time, it’ll wear off quicker.

Q: What again do you send home with the dental patient?

We send home what dentists call a tray, which is a thin piece of rubber that fits intimately to the teeth and you put a whitening solution on one side of the tooth and you leave that in the mouth for about an hour each day.

Q: What about follow ups and how long does it last for?

We take a shade of their teeth and when they come back or if they seem to think that their teeth have gotten darker, we’ll take another shade and verify whether it has or it hasn’t. Because a lot of times people just get used to the color of their teeth and they forget what it used to look like. And so if the teeth have darkened up a little bit more they can continue to whiten.

But usually it lasts for about two years. In about every two years you have to go through some kind of whitening process.

Q: Are there any risks to the teeth at all with the in office visits?

What can end up happening is that you can experience some cold sensitivity temporarily in the tooth. When this happens, the patient will have in their home whitening kit a solution that calms the tooth down.

Q: What about any risk to those that have existing dental issues like cavities or appliances like braces?

When I first started whitening people’s teeth 30 years ago, my concern at that time was that if they had a cavity it would make it potentially worse. So at that time I was requiring patients to get the fillings done first and then do the teeth whitening.

Since then what we found through research over the years that it actually slows down tooth decay. It actually kills the bacteria that cause tooth decay. So people could invariably whiten them even if they had cavities.

This was originally discovered by a dentist in North Carolina who was studying that particular solution that he was using to treat people with gum problems. Everybody that he treated with gum problems ended up with whiter teeth.

Q: And what about someone wearing braces?

You would want to wait until after they were completed because anywhere the brackets are attached is not going to lighten at all. So you would definitely want to wait.

Q: Do you try and set expectations when it comes to how light someone’s teeth will be at the end of the process?

You can not predict how white somebody’s teeth are going to get. It’s impossible.

Some teeth will look porcelain white, while other teeth will only change two or three shades. It’s really an individual thing and some people are just luckier than others.

We do tell everyone that we can’t guarantee how white their teeth are going to get. But I have seen shades change up 13 shades. That’s a lot. But you can tell many times whether a tooth is going to lighten or not.

Teeth come in four basic shade ranges. And the one shade that’s the most difficult to whiten is grey which sometimes can take a year to whiten. And teeth that have yellow or brown in them look 100 percent better in two weeks.

Q: So, even the tougher to whiten teeth still look much brighter than what they started with?

Please note: We will be closed starting December 24th and returning on January 4th.