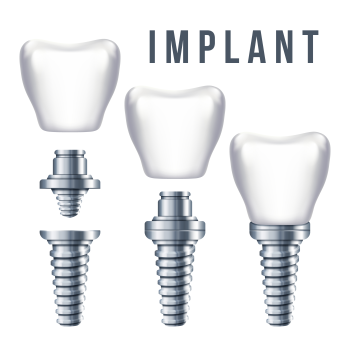 What are dental implants?

Why would somebody get dental implants?

Many times teeth have to be removed because they’re non restorable. And when they’re non restorable, it’s the best replacement option. But then there are those people that get to a point in their life where they’re unable to wear dentures for some reason. And that also allows us to replace teeth that are fixed in a position so that there’s no movement at all, so that it mimics how natural teeth function.

Can a dental implant be rejected by the body?

It’s not so much that a dental implant is rejected, it’s that sometimes the body doesn’t accept it. I’ve seen situations where an implant is placed, and then for some reason, the bone doesn’t adhere to it. And then you let the patient heal after the implants were removed and then place a new implant and then the bone heals to that implant.

I would say that about one percent of implants are not accepted by the body the first time around and the second time they are accepted.

And it could be the way that the manufacturers coat the outside of the implant may not be as perfect on one as the other. But I know that most of the time that there is a rejection, most surgeons replace it at no charge.

Are there other risk factors to consider?

There are two main things that are a factor that reduce the rate of success with regard to dental implants. And It’s all about healing.

One group of the population that has a lot of trouble healing are people with diabetes. Diabetic people heal much slower than non-diabetics.

The other issue with regard to dental implants that we’re seeing more and more these days is people that are taking bisphosphonates. This is a drug that’s used to treat osteoporosis. Bisphosphonates also prevent bone healing, and that’s a problem when you’re talking about extractions and dental implants.

Would these likely be caused by a defective product?

It could be due to a defective product. If you think about it, why does it accept one and not the other?

What role does the recipient play in the success or failure of a dental implant?

Could you explain the process of getting a dental implant and what a typical process would involve?

Can you describe some of the things that you might evaluate prior to starting the surgical portion of the implant?

The amount of bone is critical to be able to place an implant. You have to have a certain length and a certain width of the bone. And if you don’t have it, then there has to be grafting that’s done in order to build up the bone so that there’s enough bone to place the implant. The ideal situation is at the time of the extraction to place bone in the socket, which then preserves the height and the width of the bone.

Many people after losing multiple teeth lack enough available bone for an implant and require grafting which is done to build up the bone to give it more thickness and width. And then there’s a waiting period before the implant can be placed.

There are certain areas in the mouth that rarely need to be grafted, which include the lower jaw in the anterior part of the mouth. The posterior of the mouth, upper and lower, are more prone to needing grafting.

What about the sinuses? Do they come into play at all?

The sinuses definitely come into play. And the reason that they come into play is because when the tooth is extracted, the sinus enlarges which makes the thickness of the bone smaller. And many times, in order to put an implant in the position where the sinuses are at, you have to lift the sinus, place bone inside the sinus and then wait for that to heal and then come back and place the implant.

Are there other options for replacing teeth?

The state of the art for tooth replacement these days is dental implants. There are other options for replacing teeth, but these options include several downsides.

The only downside for dental implants is typically the cost and the length of time that it takes to go from point A to point B. Other options you can get done quicker, but these other options can cause more damage to adjacent teeth and soft tissue in the long term.

One alternative would be to place what’s called a bridge. To make a bridge you first need to strip off all the enamel of the adjacent teeth. And when you do that, you’re traumatizing two teeth that would otherwise not need to be traumatized. Any time you touch a tooth, you always run the risk that the nerves and the teeth go bad. When that happens you end up needing root canals on those teeth. Root canals can save teeth, but they also make the tooth more brittle making it much easier to break. So, any time you can avoid doing dentistry on adjacent teeth, the overall health of the mouth is going to be much better. The other issue in regards to bridgework is that they are very difficult to keep clean. Most of the loss of teeth that I’ve seen that are associated with bridgework are due to people failing to do the proper maintenance.

Another option for replacing teeth would be removable dentures. Dentures can be all or part of the teeth in the mouth. Partial dentures means that you are using the remaining teeth to attach the dentures, which puts forking forces on those teeth and ends up causing those teeth and bone to be weakened.

It’s been my experience that people that lose teeth normally don’t have the best hygiene. So if hygiene isn’t maintained meticulously around these removable appliances, or even fixed appliances, you’re going to lose more teeth. So, if you can leave the adjacent teeth alone and place dental implants instead, the long term success for the patient is much better.

What sort of risks are there by not addressing a missing tooth?

One risk is the movement of teeth. When you remove a tooth, the forces of you biting are enough to start shifting teeth. They typically can turn a tooth from standing straight up to tipping it completely on its side. And once it gets to that point the tooth has to be removed. So, part of the reason that dental implants are placed immediately is to maintain the space and maintain the bite and keep the body in a normal function.

From start to finish. How long does it typically take to complete a single implant?

I usually tell patients it takes about eight months from beginning to end. Which for some people is not quick enough. But a quick fix option is typically not as good as placing an implant. It’s important to set the proper expectations that implants take longer to complete, but that the benefits are going to far outweigh any other options if appearance and longevity of the tooth is important to them.

How realistic looking are dental implants, and is there any flexibility in choosing what the implants look like in comparison to natural teeth?

Typically, we go through a whole set of steps that allow the patient to decide what they want it to look like. It’s been my experience that if you give patients the option, they typically will pick some of the whiter teeth on the guide. When I graduated from dental school, we always put teeth in the mouth that were age appropriate. We’re now living in the generation where everybody is wanting their teeth to be much more youthful looking. And I’m not going to discourage someone from picking what they want is their life.

So, that’s the first thing when a patient comes to me, I try to get into their head to find out what they want. The last thing I want to do is redo a case because it didn’t fit the idea of what they wanted. I spend an enormous amount of time just discussing and having patients look at pictures. Some patients even bring me pictures of what they want their mouth to look like. And I use those pictures and send them to the laboratory and the laboratory works with that. Then we try the case in the mouth and let the patient look at it. There’s a lot of steps that have to be checked when you’re doing a full mouth case or even a full arch to make sure the patient is satisfied with the results.

The major risk is more for the person who is placing the implant. They have to make sure that the implant that they’re placing isn’t too long. And what I mean by too long is that there is anatomy where nerves are inside the mouth and you don’t want to touch a nerve or cut a nerve because this will cause the patient to lose feeling.

Nowadays with Cad / Cam dentistry, you have three dimensional images of all the hard and soft tissue that you wouldn’t normally be able to see, which then allows you to know exactly where the nerve is at. You can plot all of that way ahead of time greatly reducing the chance of damaging a nerve.

What sort of discomfort or pain can one expect after the procedure?

Most patients that have implants say that it’s easier on them having an implant placed than it was to have a tooth extracted.

After the procedure, people are going to feel soreness where gum tissue was cut. They usually get primary closure, and what that means is the gum tissue heals completely over in two weeks. As far as the healing of the implant, we typically don’t uncover the implants for four months. The rest of it’s just waiting for the bone to heal into the implant.

The key is making sure that whoever you’re working with is a good practitioner. I normally send all the patients that need implants either to an oral and maxillofacial surgeon that I work with or a periodontist that’s skilled in placing dental implants.

In the state of Florida, can anyone that’s a licensed dentist perform dental implants?

Anybody in the state of Florida that’s a licensed dentist can place dental implants. However, there’s a difference in the skill level and the amount of training that goes on between a general dentist and an oral and maxillofacial surgeon. Oral surgeons after dental school go into a residency program that takes five years. At the end of that five years, not only are they a dentist with a specialty but they’re also an M.D. So they get an M.D. degree along with their dental degree. Oral and maxillofacial surgeons by far have the best training to place dental implants and can handle any problem situation.

The next group of people that have tried to get into implant dentistry are the periodontist. Many periodontal programs in the United States now are training the periodontist to place implants, and they do that on paid volunteer patients. There’s an enormous amount of training that goes into both of those two specialties, whereas general dentists are learning for the most part on patients, which in my opinion is not a good thing.

Are there any age restrictions to getting dental implants?

Is any of this covered under insurance?

It depends on the person’s insurance. Some plans will cover implants and some won’t. So, it’s up to the employer to dictate what’s in the plan, not the patient.

Please note: We will be closed starting December 24th and returning on January 4th.